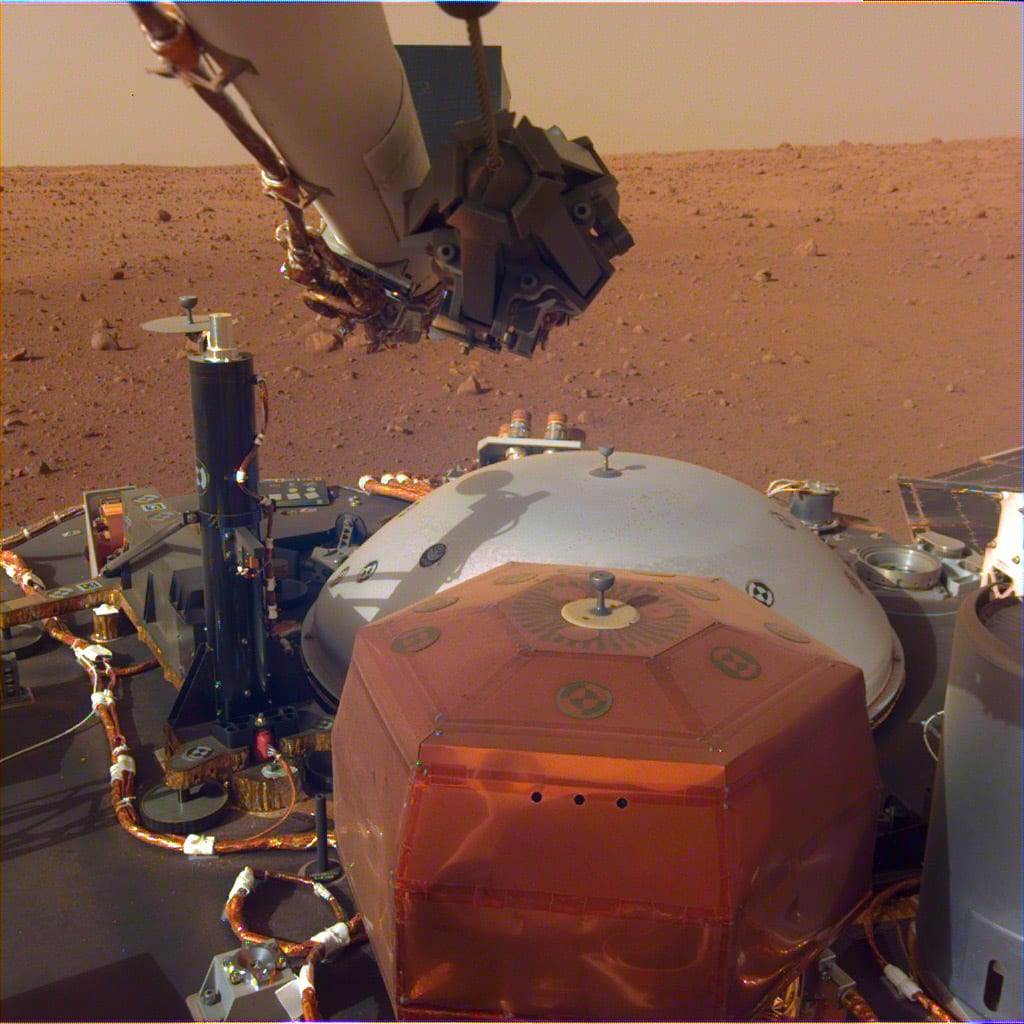 It’s been a few weeks since InSight, a robust lander, traveled 33.9 billion miles to Mars becoming 8th visitor from Earth ever. But what hhas it been up to, and why did we just spend another 6 months of travel and $830 billion to go back to Mars? The InSight project is actually vastly significant for humanity, so here we go.

How it differs from previous missions:
InSight is a Robot Geologist

Historically, scientists have only been able to study Mars’ surface using rovers such as Curiosity and Opportunity, but is seeking to uncover secrets hidden within its crust, mantle, and core using Seismic Investigations, Geodesy, and Heat Transport.

InSight is a lander, not a rover, and the first of its kind to carry a seismometer (SEIS) onboard as well as a heat probe (HP3). Other missions only included basic tools such as spectrometers, pancams, microscopic imagers, and calibration targets. Understanding Mars’ composition will help us understand it’s history and it’s inner workings. Both are very important steps towards Nasa’s goal of human on Mars in  20 years, and our fearless leader’s plans to launch people in Mars in 6.

And just in case you’re wondering, this is how InSight’s location compares to other missions. While only being 372 miles away from Curiosity, the lander and rover have no chances of ever actually meeting. Here is a map of all the LZ’s.

Why is the InSight Mission Important?

Much like Goldilocks’ conundrum, scientists found Mars to be just right: neither too big nor too small, but just the right size. They’ll be able to get an understanding of how planets are formed by studying processes that occurred 4 billion years ago! Similar to Dr. Brown’s DeLorean, scientists will catch a glimpse into the past of rocky planets, but unlike the fictional time-machine, InSight boasts infinitely impressive specs. InSight will show us just how much seismic activity occurs, the size of its different layers, and its inner temperature, which will help us figure out if there were life on Mars before, and if we might be able to sustain life there in the future!

It all rests in the hands (or more appropriately- ARMS) of this rocking robot and the team of global scientists working behind it. So the question now is: how?

Unique Features of the InSight Lander

If at any point in your life you’ve used the claw machine at an arcade, you’ve experienced the stress and perils NASA scientists will face, except replace the dingy three-pronged claw with a highly-developed robotic arm, and instead of controlling a joystick right in front of a machine for $1 plush toys, you’re millions of miles away blindly maneuvering millions of dollars worth of equipment while gambling the promise of infinite knowledge, no pressure.The Instrument Deployment Arm will be responsible for the placement of two very important things: the seismometer and the heat probe, which will be put directly onto the ground for the duration of the mission. Because InSight is a lander, it is tasked to remain stationary to ensure the accuracy of the data gathered.

First, let’s consider the landing. Upon entry into Martian atmosphere, InSight deployed its parachute to slow down from 12,500 mph to 5 mph in an atmosphere 1/100th of Earth’s travelling 80 miles to the surface, all in the time it takes you to make a pot of coffee (about 6 minutes). And you say there isn’t enough time in the day? For shame. Compared to NASA’s previous lander, Phoenix, InSight’s landing system is lighter, uses a thicker heat shield, and a stronger parachute. Phoenix entered the atmosphere at a higher velocity, and deployed its parachute 7 seconds late veering it away from its intended landing site. InSight successfully avoided these mishaps, despite facing challenges of its own like having more mass upon entry, less time for deceleration, and being geographically prone to dust storms.

What InSight has Done so Far

InSight landed on a lava plain named Elysium Planitia inside a shallow impact crater. Scientists have compared the site to a large sandbox, with minimal rocks and slopes, and predictable conditions. This will allow for InSight to deploy its equipment safely. Using its camera, the lander snaps a shot of its deck containing its equipment, then later on produces a composite image of itself within its workspace. HiRISE, a powerful camera onboard another NASA spacecraft spots InSight’s exact location, capturing its heat shield and parachute. And for the first time ever, NASA captures the planet’s soundscape, recording Martian winds. Everyday scientists come one step closer to achieving their goals.

View from robot arm of deck and equipment

Lander takes 11 images stitched together of itself on the surface

And this is only the beginning of InSight’s journey. So if you like outer space and robot arms but don’t quite have the time to set up a trip to Mars, come on down to Reason for a Mars party! We will help pique your team’s curiosity and discover insight on the frontier of future technology!